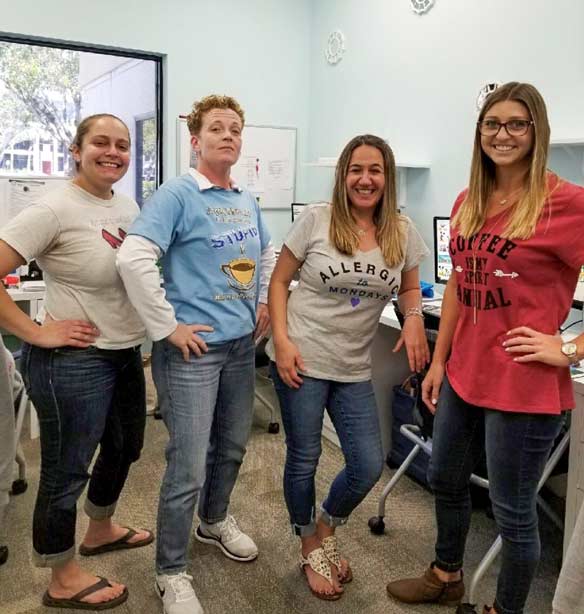 It always seems that my 12-year-old son has his worst tantrums and outbursts in public. He has autism.

I don’t know whether to call it Murphy’s law, bad luck, or coincidence. I do know that it immediately stops everyone around us so that they can turn, glare and then start whispering. I don’t blame them. I would do the same. It is human instinct, I guess, to evaluate and pre-judge others.

This weekend, I brought my children to a high school football game. It was a loud, rainy event so that didn’t help to create a calming environment whatsoever. But, nonetheless, it was a locale that we often frequent.

Following the advice and direction of his behavioral therapist, we were teaching my son that he could not and should not be wearing his sunglasses during an evening football game. He reluctantly took the glasses off and kept them in his pocket for safekeeping. The sunglasses provide him with security and comfort. I can’t remember when he became so attached to them, but I think it was on a family vacation years ago when we encouraged him to try to wear them to protect his eyes from the sun! How ironic is that? Since then, he wears his sunglasses as often as possible outside of school. It is a habit and a tradition that we are trying to modify appropriately.

Just before halftime, it happened. He realized that he had lost his sunglasses.

All eyes on my son…
and then…
they shift over to me.

I know that there is no way that I could even approach him for the first 30 seconds (which seems like an eternity). And then, I had to choose the best option for damage control because I could not make his sunglasses magically reappear.

My son’s most prized possession was gone and, as a mom, I would have done anything to roll back the time and have those sunglasses back in his pocket.  I wanted to hug him and tell him that everything was going to be all right, that someone probably picked them up and we could go and get them. But that wasn’t true.  I wish I could have told him that we could buy a new pair of the exact same sunglasses the next day.

But that would not have solved the emotional breakdown that he was having at that moment. In his mind, he was probably thinking that he would still have his sunglasses if he had just kept them on his face like he always did. As a mom, somehow I felt like it was my fault. Of all places to try to modify his behavior! My heart was pounding.  I wanted to distract him, console him, and make everything all better as quickly as possible.

2. I could go with the advice of his ABA THERAPIST.

My son’s  behavior therapist has created and implemented a detailed and amazing plan of treatment to help him to succeed in life and overcome daily obstacles, such as this one.  Part of that plan includes teaching us, the parents, how to act and react in situations. His behavior therapist has been tremendously effective and successful and has had a huge positive impact on our family.

I know that it is completely acceptable for my son to be sad and upset about losing something so near and dear to him. It is not acceptable for him to scream and yell, throw things, or hit himself. Such behavior will definitely draw attention to him by others, but should not be rewarded with my love and attention.   So, I should ignore him until he stops that behavior and then reward and praise him for doing so.  That way, I would be positively reinforcing his handling of the situation and helping him to handle future traumatic incidents.  In a public place, with dozens of eyes on me, this is and was difficult.

What would you have done? I know I am not the only one who has a child on the autism spectrum who has public tantrums and outbursts. But, when it was happening, I sure felt very alone. Aware that we were both being scrutinized, evaluated and watched, I tried to remain calm as I spoke to him. I could not completely ignore him.  What I did was to acknowledge his feelings and request that he try to take deep breaths and I told him that we could look for his sunglasses together.

I told him that I was going to walk away if he continued to act the way he was acting.  I turned and started to walk (which probably looked really bad to our audience).  As I did so, I said that somebody probably picked up his glasses and brought them home to us (a little white lie but I knew I had another pair at home).  I moved very slowly and silently, hoping that he would calm himself and join me and that the public eyes would look away. Luckily, he did.  And they did.

I know that this is all part of life with a child on the autism spectrum. Emotions are strong all around. When he is happy, he is super happy. And most of the time, fortunately, he is a happy, sweet easy going boy. But, when tragedy strikes like it did at that football game, and he lets out one of his ear piercing screams that pretty much freezes everything and everyone around us, I wish we could just both be invisible for a few moments.  That might make it a little bit easier.